I’ve had people in the past say that I need to do a ‘home tour’, and it’s definitely on the cards for me! But I realised, I don’t have one place where our previous home can be seen in its entirety, complete with before and afters. So I’ve decided to create this page where you can get the complete low down on our house renovation, including the horrors we went through and how we came out the other side unscathed (nearly).

Here’s everything you need to know about our last home, including all the renovation pictures.

The house was a 1970s semi-detached that had some interesting tiles on the front of it…..

How and When We Bought It

The Sun actually wrote an article on how we bought our first home, so you can read most of the gory details there. But it was the first house we looked at. We loved it so much because it had a double garage for Jay, and needed a lot of renovation work. We wanted a house that needed doing up because we knew it would cost less, and we could sell it for a profit after the work was done.

It was a three-bed semi-detached based just outside of Chester. It was the ideal place for us as it was located near two major motorways, 20 minutes from each of our parents’, and the house prices were far lower than anything we could have got in Chester. We exchanged in January 2017 and spent 6 months renovating before moving in on the 1st of July.

The kitchen was the first room we got cracking on. We’d had the keys about 3 days before the whole thing came out. It was in terrible condition, being about 40 years old. A leak from the soil pipe (on the inside of the house) had rotted most of the units, making them extremely unstable.

The kitchen was removed in about 2 days by Jay and my dad. They definitely enjoyed smashing it to pieces. EVERYTHING about this house was old-fashioned. Look at that horrendous strip lighting. We didn’t know the soil pipe was leaking until the kitchen was removed. We hadn’t planned to touch any other rooms, only do the kitchen up and move in.

Before the house sale had even gone through, we bought our kitchen on eBay. I couldn’t believe it when Jay said he’d found a kitchen on eBay, but I really liked it.

It was only 5 years old, and for £850 we got a £20k kitchen, complete with range cooker, built-in fridge and freezer, a Belfast sink and granite worktops.

It was hard to make a kitchen that was custom-made for someone else’s home fit into ours. But Jay managed it, after a lot of cabinet moving! The photo above shows the finished layout, but it all had to come out to get the room plastered….

We uncovered an old doorway which was made of chipboard and so couldn’t be plastered over. Jay had to create a stud wall which was eventually plastered.

And there’s our finished kitchen. We bought the tiles from new, and fitted spotlights in the ceiling. Jay even made my cooker hood using leftover cabinets that we didn’t put in the kitchen because the other one had basically had its day.

As mentioned above, we were planning on living with the bathroom until after we’d moved in. It all worked fine, it just didn’t look very nice.

I was really worried that this cladding was hiding something sinister, like severe damp or something. However, when we took it away, the bathroom was in good condition. Must have just been the fashion.

Most of the bathroom came out, as did the soil pipe that ran down that back right corner into the kitchen below. It was moved to the other side of that wall, down the outside as it should!

But, this now meant we needed a new bathroom suite. This was something we hadn’t expected to buy so soon. But, you need a shower and a toilet so…..

We headed to Wickes and managed to get our bathroom in their 60% off winter sale (and got my brother’s staff discount on top).

The living room was probably the easiest room to deal with. It didn’t have any severe wiring issues, or plumbing issues.

The first thing we did was take out those weirdly placed patio doors that were INSIDE the house. I can only think that that must have been a scam, because why else would you put patio doors on an inside wall?

Luckily for us, we’ve now moved them outside and they lead into our garage! We don’t throw anything away, but try to reuse where we can.

Instead, we put in an archway there that leads into our kitchen diner.

We took out the old electric fireplace and managed to sell it on Facebook for free. We just wanted it gone, and it saved us a trip to the tip. Jay actually ‘built’ our fireplace for free too. He used paving slabs that we took up from outside, and then got the slate for free from a family friend. He put the slate on top of the paving slabs, and voila, free fireplace hearth!

Rather than paying a joiner, Jay built the stairs himself (despite never having done it before!). We did have a small issue when he first put the newel post in. He’d put it in far too low, so the banister would be a perfect height for a five-year-old, but not for an adult…..but this was quickly rectified!

We decided to turn the third, single bedroom into a home office for me. Before, it had some questionable carpet with pink stains on it, some gorgeous flowery striped wallpaper and stunning pink curtains with flowers on to match:

Behind the door is where the boiler cupboard is situated, so it makes the room a bit of an awkward shape, but we made it work:

I stripped all the wallpaper, and we boarded out the ceiling to get rid of the horrible artex. Then we lining papered the whole room before putting the paint on the walls.

The flooring was leftover from when we did the kitchen, so we only had to buy one more box and the study flooring was done too!

I chose quite neutral colours for the study. I adore that wallpaper, and I chose a soft green to go with it.

We didn’t expect to move house so soon, however, we decided not to touch our two bedrooms. Instead, we put the house on the market, and so these two bedrooms didn’t change at all from the original estate agent photos in 2017.

We put this house on the market in March 2020 and sold it within 3 weeks. Out of the five viewings we had, all of them made offers which is quite unbelievable. We moved out in August 2020 (when it looked touch and go for a while with lockdown and also hold ups in the chain) and into our new home.

Welcome to Dream of Home! 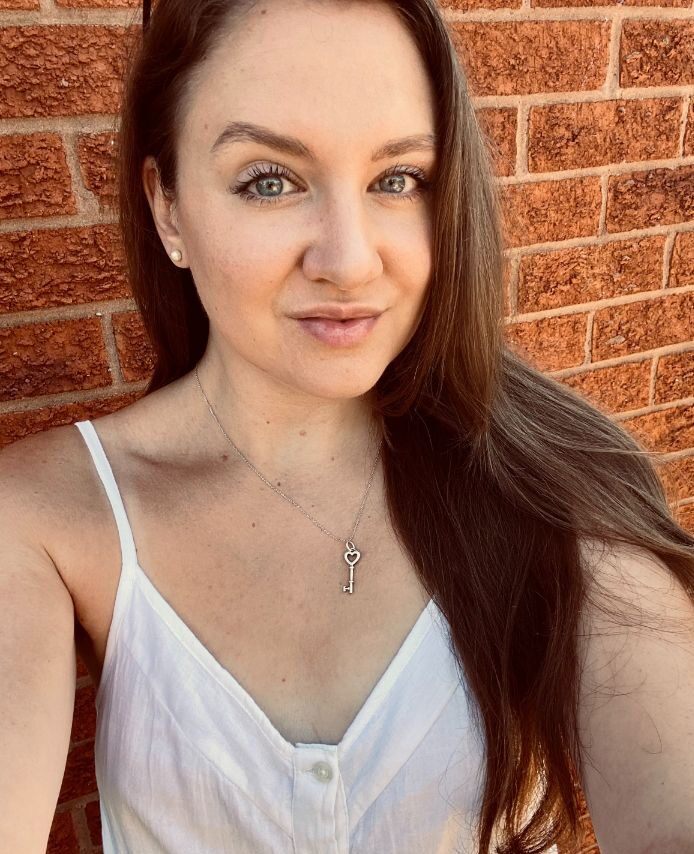 Welcome to Dream of Home! It’s my budget home interiors blog showcasing lots of renovation advice, beautiful interiors and more. I’m a 27-year-old homeowner who loves traditional interiors and we’re still in the throes of renovating our home and garden.